A couple weeks ago I received a notification from Onalytica that I would be included in their latest Who’s Who in Cloud? report for 2022 under the category of Content Creators. I’ve been aware of Onalytica for a while now, but haven’t paid them much mind. In fact, I wasn’t entirely sure of what they do, but I knew they had put me on some list in 2020 as a cloud influencer. This seemed to be more of the same, and while I appreciate the recognition, I also have no idea if it matters in the grand scheme of things.

The report was released in the following days, and they tagged me on Twitter with a link to the report. I figured I would give it a gander, and what I saw was… how to put this diplomatically, incredibly homogenous. 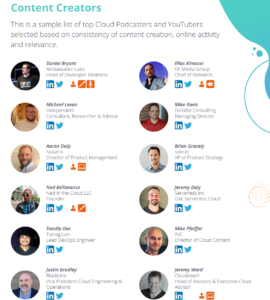 The page I was featured on for content creators was composed entirely, ENTIRELY of men, and only one of color. This was their list of content creators selected based on "consistency of content creation, online activity, and relevance." Sorry ladies, you’re not consistent or relevant. Needless to say – I am writing a blog post after all – I had some feelings about this list.

"This is a sample list" is what it says at the top of the page, which, fair enough. Perhaps the rest of their database is brimming with BIPOC folks from all edges of the globe. Perhaps they have an amazing assortment of diverse content creators that simply didn’t make the cut. That’s not a good excuse and in some ways is actually worse. Allow me to enumerate the reasons:

The report has 172 entries across eleven categories. Out of the 172 people Onalytica chose (remember this is a sample, so this is what they chose to include) 140 are men. Only 19% are women, and 10% are people of color. That’s um checks notes less than representative.

At the beginning of the report Onalytica says:

Onalytica uses a unique combination of our proprietary software, human qualitative analysis and secondary research to analyze online and offline influence, to create the best social influencer lists in the world. Our influence scores are driven by 38 algorithms and this methodology has been continually refined over the past 10 years to evolve with social media developments and how influence is best calculated.

Oh goodness! That’s a lot of words. They’ve got 38 algorithms! Can’t fault the results, there are so many algorithms, how could it be wrong?

I would also like to point out, they are using human qualitative analysis. That’s fancy speak for having an actual person making decisions based on factors that would be difficult to quantify with an algorithm. So it’s not just a fancy machine spitting out ranked names. This list is also hand-curated.

There’s a lot of problems with this report, but the biggest is one of representation. Put in the most blunt way possible, diversity matters and this report fails to meet the minimum standard.

I don’t want to just leave it at that. There’s some nuance here I want to elucidate.

Representation matters in two important ways. It matters to the companies receiving this report and to the people reading this report. Sounds like I said the same thing twice, but bear with me.

On the anecdotal side, I’ve been picking up a lot of new Twitter followers in the last two weeks. I can’t attribute this directly to the report, but I also cannot rule it out.

We already have representation issues in tech; I don’t think anyone could reasonably argue we don’t. And those who do can go take a jump in Lake Disingenuous. I hear it’s lovely this time of year. Reports like the one from Onalytica help to reinforce the representation issue by amplifying the status quo.

There’s plenty of blame/responsibility to go around when it comes to promoting change and diversity. The companies searching for influencers can make diversity a priority, and they should. The influencers themselves can use their clout to put a spotlight on a fellow influencer who deserves more attention. And finally, Onalytica should be mindful of who they are promoting and what signal that sends to the industry.

Increasing diversity is something everyone can help with, and firms like Onalytica have a platform to help more than most.

See you, see me

Representation matters to the people reading this report. The individual people looking at this report are being given a clear signal. Here are the people Onalytica and the larger industry thinks are important and noteworthy. If you aspire to be influential in the tech industry, you should look like this.

That’s great for someone who looks like me! I thumb through the pages and think, "Hey I bet I could do what all these fellas are doing. In fact, I already look the part!" I also benefit tremendously from an overabundance of confidence and some significant privilege. And would you look at that, I’m already on the list. How about them apples?

For someone who doesn’t look like me, the message is quite different. The report aggressively says, "You don’t belong in these hallowed halls. You are not and will not be influential. In fact, you shouldn’t even be in tech. Wouldn’t you be happier in marketing?" Okay, I’m being a little hyperbolic. However, when I think about all the other barriers already in place for underrepresented folks, maybe I’m not being hyperbolic. Maybe I’m just plain bolic.

The central point is that underrepresented folks will be more likely to join the tech industry and become influential if they see other people like them being supported and promoted. Having mentors and role-models that share your experience and background is tremendously helpful. I’ve never had a shortage of folks who look like me, and I’ve definitely received help and advice from them. At the very least, I’ve always felt like I belonged in tech.

I think it’s hard for anyone in my position to understand how difficult it must be for others. Luckily, some of those underrepresented folks have been candid with me about the tech industry and what a dumpster fire it can be. And I have had the good sense to listen.

Be the change you want to see Onalytica. Listen to the people who are telling you change is needed. And then do something about it to show you care.I’m going to give you the benefit of the doubt, and assume you do.

Listen, I’m not perfect about this kind of thing. I’m not pretending to be some bastion of diversity who’s never made a misstep. Learning about the need for diversity and how to take action to promote it is an ongoing journey and I don’t expect to ever complete it. The important thing is that I’m trying and I’d like to see others try too.

I reached out to Onalytica about this issue and got back some vague platitudes about how this was a sample list and they use algorithms, yadda, yadda, yadda. Likewise, a friend of mine also reached out via email with similar concerns and also got the brush off.

While I can’t force Onalytica to change, there is something I can do. I’ve asked them to remove me from the report and not include me in their future reports until they have addressed their representation issues. If you are included in the report and feel motivated to do the same, I encourage and applaud you. They say we’re influential, so let’s use that influence!